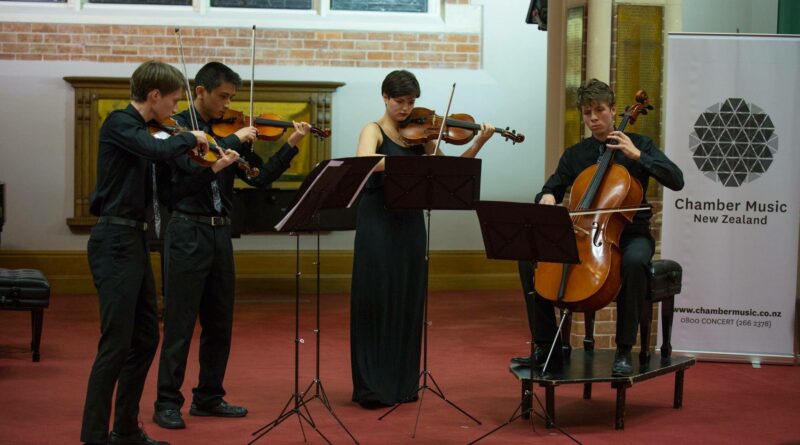 The New Zealand Community Trust (NZCT) Secondary Schools’ Chamber Music Contest is the longest running youth music competition in New Zealand. The Contest is for secondary school musicians and composers, and each year it attracts hundreds of ensembles nationwide.

The Druz’ya Quartet were happy to answer some questions for us:

Druz’ya means ‘friends’ in Russian. How long have you all known each other? Was there an instant click with the group?

Rather than calling ourselves the Shostakovich Quartet, we chose Druz’ya Quartet because we have been music friends for quite a few years through orchestras and previous chamber music groups, and the name Druz’ya could stay relevant after the contest, for other works too.

We have been in Suzuki circles all our lives, and over ten years we have regularly attended maybe more than fifty Suzuki workshops and camps between us, where we played alongside each other in group lessons, master classes, ensembles, and on Concerto Night too. There are always ‘group dynamics’ with a new group, but we clicked together pretty quickly. Out of all six groups in the finals of the Contest, our group was the only one containing three guys! We were glad Lauren took up viola to be with us… and she is thrilled to have found that viola is ‘her’ instrument! Lauren brought balance to our group.

How did you find the experience of working as a quartet?

Some of us have played in a quartet before, but playing Shostakovich 8 with new friends in a String Quartet was certainly a different experience. It developed our musicianship, and especially our ensemble playing!

How did you decide which piece to perform?

At the end of the Wellington Suzuki Summer Camp, Helene Pohl, the first violinist of the New Zealand String Quartet (NZSQ), suggested we form a group for the Chamber Music Contest. Helene suggested several works from which we could choose. As a group, we unanimously decided on Shostakovich no.8.

All four members of the quartet are also accomplished in very different activities – Milo at tennis, Andy at table tennis, Lucas as a dancer, and Lauren as a boxer. How did you organise practice sessions along with your other extra-curricular activities?

It was hard that we were all busy. But, in a way, it made it easier. We looked at our timetables to find possible rehearsal times, and we all sacrificed some of our other activities to prioritise quartet rehearsal time. Sometimes, when one of us couldn’t make it to a rehearsal, it was still worthwhile for the rest of us to meet. We were able to hear the music from a different perspective and we appreciated the missing part.

It was helpful having co-operative parents transport us (and sometimes other group members, and even tutors) to Druz’ya rehearsals. We normally practised later in the evening, after our various activities – it was always good to hear our Shostakovich friend again!

What were the highlights for you – from the district rounds to winning at the finals?

We all really enjoy playing together. It was very satisfying to hear our improvement after coaching, and with the NZSQ’s Chamber Music Workshop over Queen’s Birthday weekend. There have been many highlights along the way. We were particularly ‘highly strung’ for the semi- final round in Victoria University’s Hunter Building, where the tempo of the second movement kept us on edge, but we did manage to hold it! Of course, winning the finals was the icing on the cake.

How did you practice? Is there an app that you used for your practice that you would like to share with our readers?

Firstly, we learned our own parts before we put the music together, two parts at a time – a quartet has six combinations of two! In terms of apps, Milo tuned his cello using a tuning app on his mobile phone, and then we tuned to the cello. We used a metronome to stay in time where there were changes in time signature. We used Messenger to find times to rehearse together.

We worked on intonation a lot – learning to make a quartet sound by building chords, usually from the bottom up. We really studied the score for dynamics and articulation. It was good to figure out the harmonic progressions too.

Who are your inspirations and influences?

YouTube and live concerts are a great inspiration. This group was especially exciting – for everyone. Our teachers are our main inspiration, particularly Lynley Culliford, who has always encouraged her students to participate in chamber music. This has taken us to another level of music making. Chris van der Zee gave us a violist’s perspective, and Rolf Gjelsten (the cellist in the NZSQ) shares Milo’s interest in tennis, so he made several references to tennis when he was coaching us. Helene Pohl (first violinist in the NZSQ) particularly helped lead us on our amazing journey into the world of Shostakovich and chamber music. Our families, especially our parents, made even more sacrifices to help us play chamber music at this level.

What do you want to explore in the future?

The Druz’ya Quartet has been asked to play Shostakovich no. 8 again on 9 November for a Kristallnacht Holocaust Commemoration Concert in the St James Theatre, Wellington. We are looking forward to playing the last two movements as well at this event. In February 2018, the Druz’ya Quartet hopes to play together again in Nelson at the Adam Summer School – more than a week of intensive chamber music. Each member of the quartet intends to continue music studies at a tertiary level, and play in orchestras. We definitely want to explore more chamber music. 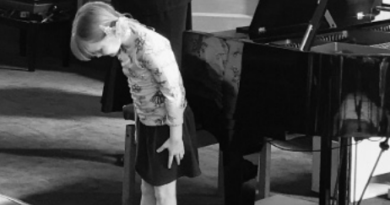 In Praise of Praise